The survey will measure variations in the Earth’s natural ability to resist electrical currents. The data gathered will provide insights into the rocks and geological structures from near the surface to approximately 60 km deep within the earth.

The survey is part of the Eastern Victoria Geoscience Initiative, a program to develop a greater understanding of Victoria’s underlying geological architecture. The new survey will build on existing knowledge gathered by the Geological Survey of Victoria, including a seismic survey that was undertaken across the Southeast Lachlan crustal transect in 2018 and gravity survey completed in 2019.

The magnetotelluric survey will add to Victoria’s geological knowledge base and contribute to future scientific research. It will also help government to make better informed earth resource and land management decisions. 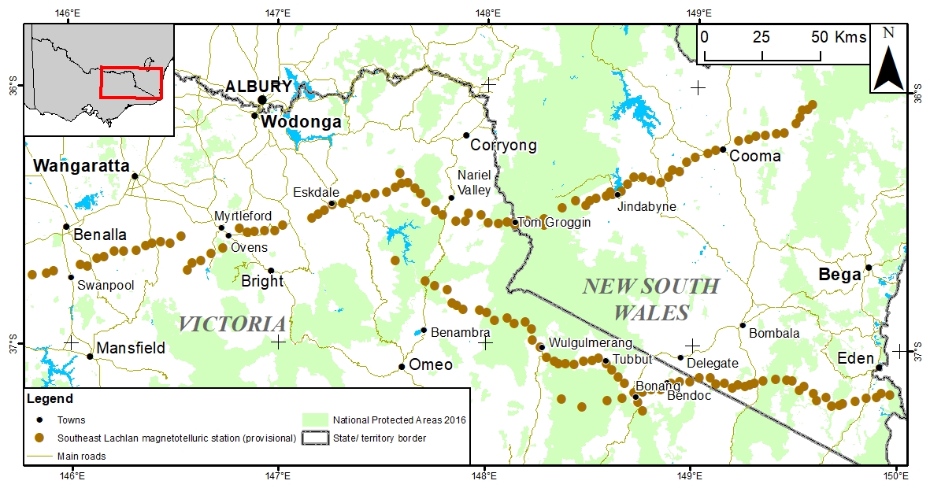 The magnetotelluric method is a passive scientific technique that monitors natural variations in the earth’s magnetic and electrical fields over time. The survey instruments will measure the electrical resistivity of rocks from tens of metres to tens of kilometres below the surface.

Survey equipment is set up at each site to record for 20-30 hours.

By taking measurements at many locations in the survey area, geoscientists can map the differences in earth’s natural electrical resistivity from place to place. These differences in resistivity are related to the composition of the earth’s crust and mantle and will be used to interpret the position and relationship of rocks across the Southeast Lachlan Crustal Transect.

Each electric sensor is comprised of a pair of electrodes which are separated by 50-100 m and buried in moistened ground (Figure 3). The electrode is housed in a (jam tin-sized) cylinder (13 cm-long, 7.5 cm diameter). The electric sensors are set up with both a north-south and east-west orientation.

Wires connecting the sensors to the data logger will also be deployed, and these may need to be protected from damage.

Sites are nominated based on desktop GIS and satellite imagery analysis. The best locations are flat, clear ground covering an area of preferably 100 m by 100 m. Each site needs to be distant from man-made sources of electrical and magnetic noise such as power lines, gas pipelines, railway tracks, main roads, electric fences, rivers and large dams. Site selection is confirmed with a field visit to check the desktop assessment. The selection process also ensures that there is no potential conflict with farming or local activities.
The surveyors transport their equipment in 1 or 2 light 4WD diesel vehicles as some of the equipment is heavy (e.g. 12V batteries and coils of wire).

Public land managers and private property owners along the route are consulted as part of the survey planning process. Prior to the survey beginning, site access and entry conditions are negotiated with individual land owners and managers with permits from the relevant authority obtained where necessary.

Under Victorian laws, geological surveys can be authorised on behalf of the Department of Jobs Precincts and Regions under Section 112 (1) of the Mineral Resources (Sustainable Development) Act 1990.
The survey will be carried out by an experienced magnetotelluric survey contractor under the supervision of Geoscience Australia and the Geological Survey of Victoria.

A detailed risk assessment and mitigation plan will be prepared by the contractor to ensure the safety of the surveyors, the public and the environment.

The magnetotelluric survey equipment only receives readings of magnetic and electric fields, whether they occur naturally (e.g. lightening) or are man-made (e.g. electricity transmission). The equipment does not produce any emissions.

Biosecurity arrangements will be in place to avoid the transport of soil and organic material from site to site.
Some very minor site disturbance is necessary to install the monitoring equipment. All sites will be rehabilitated to the satisfaction of the land manager following the completion of works.

The data gathered during the survey will be processed and then made publicly available through this website and the Geoscience Australia website.