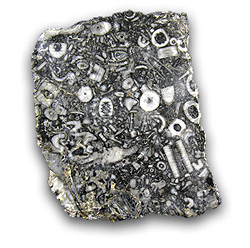 Limestone and dolomite have been formed in a variety of settings in Victoria and range in age from early Palaeozoic to Quaternary. Younger limestones tend to be friable and porous, whereas older limestones are often dolomitised and silicified, or metamorphosed and recrystallised to marble.

Current uses for limestone in Victoria, in descending order of tonnage consumed, are:

There are three main types of limestone of commercial significance in Victoria:

Silurian–Devonian limestones are confined to the eastern half of Victoria, with major deposits at Buchan (Rocky Camp), Bindi, Lilydale, Limestone Creek and Tyers River. Only the Lilydale and Rocky Camp deposits are currently being worked. The Lilydale deposit consists of hard, dark-grey, recrystallised dolomitic limestone.

There are also minor Cambrian limestone deposits that have not yet been exploited. These form lenses along the southern margin of the greenstones of the Wellington–Dolodrook River.

There are extensive deposits of Tertiary bryozoal limestones in southern Victoria. These have been worked at many localities, including Bairnsdale, Sale, Woodside, Merrimans Creek, Longford, Darriman, Geelong, Batesford, Portland, Cudgee, Curdie, Warrnambool and Waurn Ponds. The only current cement-manufacturing operation is from a major deposit at Waurn Ponds. Other deposits provide limestone for agriculture and road-making.

Pleistocene dune limestone and Holocene aeolian calcareous sand have been deposited along much of the Victorian coastline. This limestone is predominantly used as a soil conditioner, but has also been used for building stone, as shell grit, as aggregate, in glass manufacture and in cement manufacture.

Because there are extensive limestone deposits in Victoria, only the most significant deposits are shown on the accompanying map.