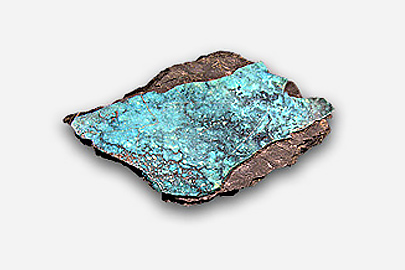 Phosphate rock is a general term used to describe natural mineral assemblages of variable composition that have a high concentration of phosphate minerals. Most of the minerals in phosphate rock belong to the apatite group.

The major use of phosphate rock is in the manufacture of fertilisers, but it also provides a source of phosphorus and phosphoric acid for water softeners, cleansers, soaps, detergents and insecticides.

Phosphate rock may be in the form of nodular, residual phosphatic limestone, vein phosphates, or consolidated and unconsolidated phosphatic sediments.

Calcium and aluminium phosphates (wavellite and turquoise) have been found at several localities in Victoria, but the only known production (16,270 tonnes) was from Phosphate Hill, near Mansfield.

At this locality, dark-grey to green, medium- to coarse-textured phosphatic rock is associated with cherts and fossiliferous shales of Early Ordovician age. The phosphatic rock is characterised by filaments of wavellite, turquoise and quartz.

There are low-grade phosphatic beds on the Howqua River, and phosphate-bearing rock has been recorded in Cambrian tuffaceous beds on Fullarton Spur, near the Barkly River. At Edi and Whitfield, south of Wangaratta, there is turquoise in Upper Ordovician black shale.

Small inliers of Lower Ordovician sediments in the Hoddle Range, near Foster, are phosphate-bearing. In the Otway Basin, phosphate has been recorded in parts of the Lower Tertiary Wangerrip Group. Phosphate rock has been worked at Howes Creek, Goughs and Wappan, where there are grey to black fragments of phosphate rock in a breccia zone.

Geological and mining history of Victoria