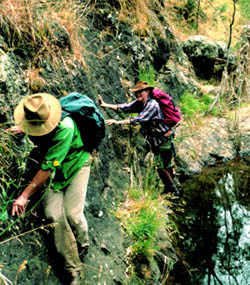 When geologists go into the field these days, they do many of the same things that Selwyn and Daintree did 150 years ago. They still hit rocks with a hammer, take notes, record their location, and may take samples for later analysis.

But in carrying out these tasks, today’s geologists are aided by four-wheel drive vehicles, palmtop computers, aerial photographs, satellite navigation, and geophysical images.

Geophysical images are representations of particular physical characteristics of the rocks. These give clues about the underlying geology and pinpoint areas of interest for examination during fieldwork. Aerial photographs are taken by a camera pointing directly downwards beneath an aeroplane.

Look at an aerial photo through a stereoscope, and the lie of the land leaps into dizzying, three-dimensional reality. The rise and fall of the country can tell us a lot about the rocks that lie hidden beneath soil and vegetation.

First used by geologists in the 1940s, aerial photos also act as an invaluable guide in remote areas not yet covered by topographic maps.

Airborne geophysical data are a key tool in modern mineral exploration, and are now also routinely used by the GSV to assist in producing and interpreting geological maps.

Over the past decade Victoria has been covered by airborne geophysical surveys. Magnetic, radiometric and digital terrain data are all collected simultaneously by three different types of sensors mounted in and below an aeroplane or helicopter.

Geologists eagerly await the processing of this geophysical data to provide the type of images shown here for the Brookville 1:50 000 map area in eastern Victoria.

Geological boundaries, shown in white on these images, are taken from the geology map (A) to highlight the usefulness of the data in interpreting the geology.

On the magnetic image (B), granites with a high magnetic response are shown in red, standing out against less magnetic sedimentary rocks, shown in blue.

The radiometric image (C) shows the radiation response of the ground surface. The nonmagnetic kidney-shaped granite in the northeast part of the image, not evident in the magnetic image, is shown as a green (thorium-rich) area in the radiometric image.

Linear valleys apparent in the southern part of the digital terrain image (D) correlate with major geological faults in the area.

With the benefit of geophysical data, the Brookville 1:50 000 geology map includes a wealth of detail not detectable by previous generations of geologists.

GSV and the future 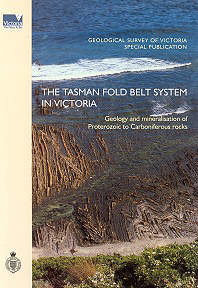 Although the geology of Victoria has been pretty much set in stone since the last ice age, our understanding of it is still evolving.

The Geological Survey has already made significant contributions to the discovery and development of gold, coal, oil, gas and mineral sands in Victoria. The development of these resources has played a pivotal role in the State’s economic and social progress over the last 150 years.

In 2000, the GSV published The Tasman Fold Belt System in Victoria, a comprehensive account of the state’s Palaeozoic geology – the seventh such account in 150 years. But developments in technology and scientific theory over recent decades make this latest interpretation very different from its predecessors. Integrating new data with old, GSV geologists have come up with a groundbreaking view of Victoria’s oldest rocks.

The book was awarded the Department of Natural Resources and Environment Daniel McAlpine award for Innovation in Science, and experts say it represents the most comprehensive geological picture of the state since the pioneering mapping of Alfred Selwyn in the 1850s.

And it won’t be the last. Ongoing scientific and technological advances mean that coming generations of geologists will have new ways of ‘seeing’ what lies beneath our feet.