First sketch of a geological map of Australia (1873)

Robert Brough Smyth is remembered for his formidable output and ability to see the ‘big picture’. This first geological map of Australia is an example of that vision.

Smyth did not survey the entire continent personally, but compiled the map from data supplied by his counterparts in the other Australian colonies, including Richard Daintree in Queensland.

Notice that, in northern and western Australia, geological detail away from the coastline was largely limited to the routes of the early inland explorers. 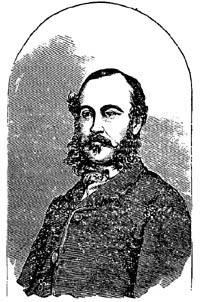 Robert Brough Smyth was a man of breadth and brilliance, no less respected in scientific circles than was his rival, Selwyn.

Smyth was Victoria’s first government meteorologist and founding Secretary of the Board of Science. For 18 years he served on the Board for the Protection of Aborigines, producing a landmark volume, The Aborigines of Victoria, in 1878.

As head of the Department of Mines from 1860–76 (and of the Geological Survey from 1870), Smyth oversaw great strides in Victoria’s mining industry. But in 1876, he was accused by officers in his department of ‘tyrannical and overbearing conduct’.

A board of inquiry heard how Smyth’s abusive outbursts routinely reduced men to tears and fainting fits. Clerks were fined for spelling errors and sacked if they used an eraser. According to one witness:

There was not an hour during which some officer did not come out of Mr Smyth’s room after being either humiliated or insulted, or subjected to some sort of tyranny.

Smyth resigned after the board of inquiry upheld the charges against him.

This map and accompanying cross-sections were prepared for the GSV by Alfred Howitt, mining warden for East Gippsland.

Mr Howitt had to undertake, not only the task of investigating the geology of this part, but also to survey and plot, piece by piece, as his leisure time permitted, nearly all the topographical features.

The cross-sections provide a splendid three-dimensional view of this mountainous part of Victoria.

Knowing that Howitt undertook the survey of this difficult terrain in ‘his leisure time’, it is hard to quibble over the omission of elevations for most peaks. Following the dramatic departure of Brough Smyth in 1876, the Geological Survey was left without drive or resources. At the same time – 25 years after the gold rushes – the mining industry in Victoria was slowing down.

The GSV drifted through the 1880s with only two geologists - Reginald Murray and Alfred Howitt - employed in mapping. In 1891, at the height of an economic depression, Howitt was appointed Secretary for Mines and acted to revive the Geological Survey and the colony’s mining industry.

Recognising that some areas of Victoria, like Gippsland, had yet to be properly surveyed, Howitt employed more geological field staff, reintroduced the quarter sheet mapping program, and commenced a series of rapid surveys. The Geological Survey was back in business.

During the late 19th century, geological maps and mineral specimens were among the many items submitted to international exhibitions by the colony of Victoria as evidence of its superiority and progress.

Here are two of the many awards received. This map was an early attempt to provide a comprehensive picture of Victoria’s geology. Based on existing GSV mapping - overlaid on the framework of Selwyn’s 1863 map of the colony - it represents a report on the Geological Survey’s progress to 1880. The ‘blobby’ and imprecise boundaries between different rock types in eastern Victoria indicate a lack of detailed mapping for that inaccessible part of the colony.

In the coming decades, as the mapping of eastern Victoria progressed, the geological map of the colony would be revised periodically as an ever-clearer picture emerged.